Commonly known simply as “Harrow”, this independent school situated in north-west London is one of the original nine public schools that were defined by the Public Schools Act 1868 and can claim to have eight former Prime Ministers amongst its very long list of famous ex-pupils.

It may be a school with traditional standards which can be traced back to 1572, but Harrow School has not hesitated to invest in the latest generation of video surveillance technology to protect its assets and create a safe and secure environment for its students and tutors.

The School has an enrolment of 832 boys all of whom board, and the video surveillance system is relied on just as much by House Masters to assist with the pastoral care of the pupils, as much as it is by the school’s security team to detect and deter unwanted intruders.

“The previously installed recording system did not have the capability to keep up with our changing requirements,” said Dr. Christopher O’Mahony, Director of ICT, who together with his security colleagues, has overseen the commissioning of the upgraded video surveillance system. “It only had the capacity to record and store two days worth of video, but more importantly, it was unable to record images from a mixture of analogue and IP network cameras and that was key to our decision to replace it.”

Many of the School’s existing analogue cameras, which had been installed some time ago, were still performing well and so Dr. O’Mahony and his colleagues were reluctant to incur the cost of replacing them. “Some of these older cameras did, however, need to be replaced because they were in locations where we wanted to see higher resolution images. We also had a requirement to introduce additional cameras in new locations and it made sense for these to be the latest generation of IP network cameras.” said Dr. O’Mahony.

“We are delighted with the performance of the upgraded system and the investment has certainly been worthwhile.”

The school invited a number of installers to participate in a tender process to supply and install a new recording solution, new IP network cameras and IP encoders to allow the images from existing analogue cameras to be viewed from anywhere on the network.

The contract was subsequently awarded to IP network security threat management specialists, Ecl-ips, “The hybrid Wavestore Rock digital recording solution was an obvious choice for us for this project,” said Aaron Kernaghan, Managing Director of Bromsgrove based Ecl-ips. “It is designed to work with any combination of analogue and IP network cameras, as well as 360-degree cameras, and this ability made the Rock an ideal match for Harrow School.”

The School now has a total of 50 cameras and these include a number of Axis IP cameras, Mobotix M12 megapixel weatherproof Day/Night cameras, internal Mobotix D24 Dome cameras and Mobotix Q24 360 degree hemispheric IP dome cameras. The security team can view images from any of the cameras either from the central control room or any PC on the network, whilst each of the school’s 12 House Masters is authorised to view the activity captured by the cameras installed in locations relevant to their individual areas of responsibility.

“We are delighted with the performance of the upgraded system and the investment we have made over the last twelve months has certainly been worthwhile,” said Dr. O’Mahoney.

“There are regular incidents of trespassers entering the campus and the very high quality of the recorded images has proved to be invaluable to our security team, as has the ability to search for video of incidents which may have taken place up to three weeks ago. Our House Masters have also provided extremely positive feedback on the quality of the images which is making it so much easier for them to use the surveillance system to help them provide the highest level of pastoral care.” 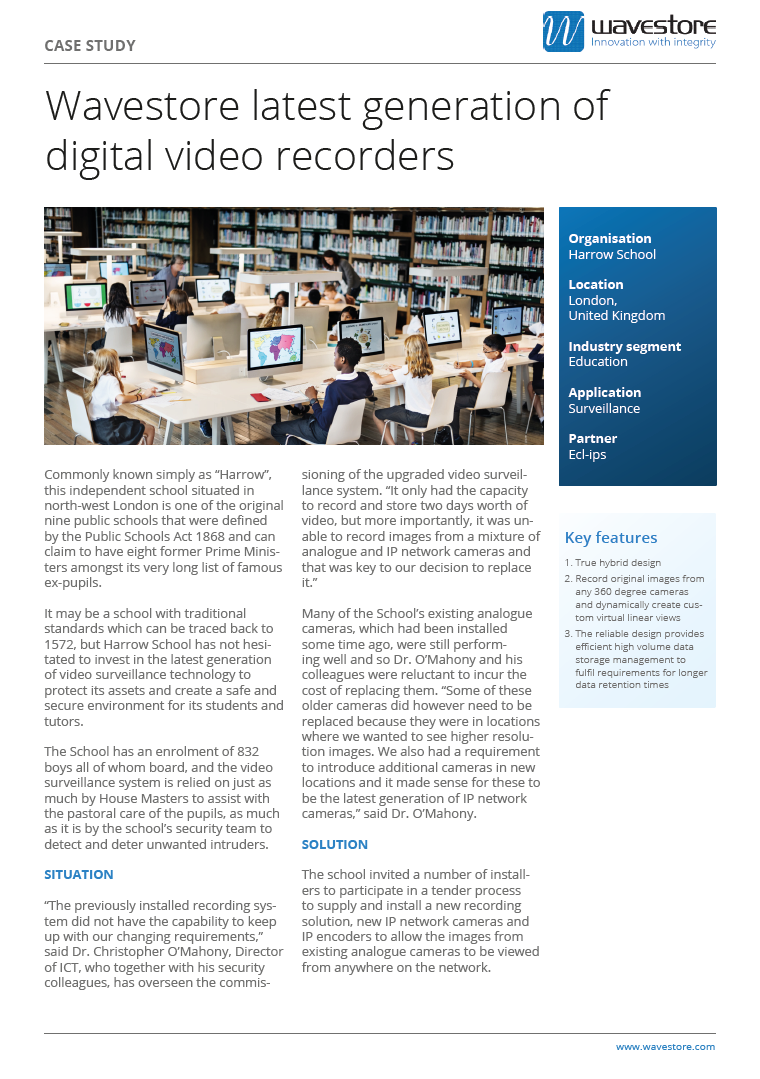