Blaenau Gwent Council has completed the first phase of a video surveillance system designed to boost safety in and around key spaces in the county borough. The system will ultimately see video captured by cameras installed in all of the Borough’s schools and municipal buildings and town centres recorded on a Wavestore Crystal (HVR) hybrid digital video recording solution.

Phase one has seen a combination of 120 analogue and IP network cameras installed around the borough, including a number at two schools. The images from the cameras, installed by CCTV specialists CDS Systems, are transmitted over a network to the Blaenau Gwent’s main control room, located in Brynmawr, where a Wavestore Crystal HVR enables operators to view both live and recorded video from both the analogue and IP network cameras.

One of the schools, which is in a small village, had suffered a number of recent break-ins whilst the other, a larger comprehensive school in a more built-up area, had experienced petty crime, drug and alcohol abuse and antisocial behaviour occurring within the school grounds.

Blaenau Cwm Primary School is based in a former coal-mining village three miles south of Ebbw Vale. Being the only school in the village, it is a central point for families growing up in the area. Recently a number of break-ins had occurred, affecting the close community on an emotional as well as material level. The existing CCTV solution was inadequate in being able to identify the perpetrators, so the Council went out to tender to update the system with a view to upgrading the cameras, improving recording facilities and providing a link back to the Council’s central control room, to allow 24/7 monitoring.

“The hybrid recording solution supplied by Wavestore has proved to be cost effective as well as efficient.”

A Wavestore Crystal HVR was installed by CDS Systems within the school, so that any images captured could be recorded locally as well as in the borough’s central control room. CDS Systems also installed motion detectors and loudspeakers throughout the school. The motion detectors alert the control room operators when unexpected movement occurs, prompting them to remotely verify any activity via the onsite cameras. If there are any unwanted visitors on-site, the control room operators are able to notify the trespassers that they are being observed on CCTV and that the police have been notified.

“The Wavestore Crystal HVR has allowed us to specify the best cameras for the job in hand,” said Andy Williams of CDS Systems. “By not being restricted to either analogue or IP Network cameras, we have managed to provide a solution which meets the schools’ requirements, whilst keeping costs at a reasonable level.

The Crystal HVR is a good quality product and as it is an enterprise-class solution, it is expandable, which means we can add other cameras in the future if required.”

Installed during the 2011 summer break, the upgraded video surveillance system is proving to be a powerful deterrent to would-be thieves.

By contrast, Abertillery Comprehensive is a large secondary school with an intake from all the towns in surrounding areas. Situated in the heart of Abertillery, the school has recently completed a building programme which has seen a new leisure centre, drama department and theatre added to its extensive teaching facilities.

At the same time as the new building was being erected, CDS Systems installed 24 new cameras and connected them to an existing CCTV system which was installed approximately ten years ago. Images from all the cameras, old and new, are transmitted over a network to two Wavestore Crystal NVRs located within the school and then onward transmitted, if and when required, to the Borough’s central control room. As is the case with Blaenau Cwm Primary School, motion detectors alert control room operators to a possible breach in security and if necessary, they can transmit messages over the network to loudspeakers around the site to alert trespassers that they are being watched.

“The hybrid recording solution supplied by Wavestore has proved to be cost-effective as well as efficient,” said Andy Williams. “It has allowed Blaenau Gwent Borough Council to extend the life of existing analogue cameras, whilst introducing the very latest generation of IP cameras where required. It has also proved to be very popular among the control room operators as they can, with minimal training, control and view all the cameras from one easy to use recording solution.” 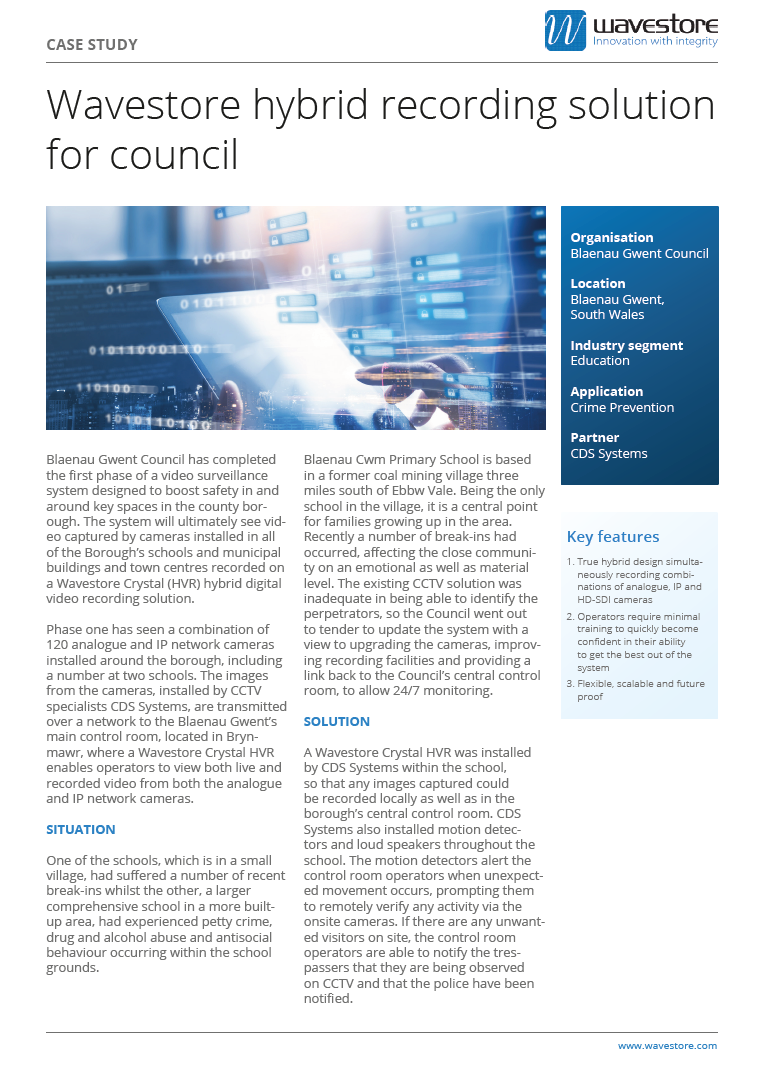