PMS International is the UK’s leading importer and distributor of a wide range of consumer products, ranging from toys, Christmas decorations, houseware and stationery to novelties, gardening products, camping equipment and electronic gadgets. Its custom-built 500,000 sq. ft distribution centre in Basildon, Essex, which was officially opened by the Princess Royal in 1995, provides customers with the opportunity to view the many thousands of stocked items on show in an air-conditioned 15,000 sq. ft showroom.

Eight years from when it was originally installed, the Wavestore server was still playing a key role in helping PMS International to monitor all activity within its distribution centre. In addition to detecting and deterring any criminal activity, PMS International has always placed high importance on the need to provide its staff with a safe and secure working environment.

The Wavestore server was tasked to record and store the images captured by 33 Axis cameras which were installed throughout the distribution centre. Wavestore’s VMS (Video Management Software) provided authorised PMS International personnel with the opportunity to simultaneously view live and pre-recorded video. If any suspicious activity occurred, the live camera images could be continually monitored by an operator, whilst they were reviewing recorded video footage of the developing situation from the same or adjacent cameras. Each operator had the option to switch from fixed 1, 4, 9 or 16 camera layouts to a free-form structure, enabling them to optimise their own unique display.

“After an eight year lifespan, the existing Wavestore recording system was still impressing us with its reliability and ease of use.”

PMS International wished to install an additional 20 cameras and at the same time proportionately increase video storage capacity to provide the flexibility to record images from all of the cameras at the required frame rates and resolutions. “After an eight-year lifespan, the existing Wavestore recording system was still impressing us with its reliability and ease of use,” said Pete Smith, Computer Operations Manager for PMS International.

“It was estimated however that we needed to increase our video storage capacity to 12TB. We considered a number of options which, although we were not in any way dissatisfied with Wavestore, included obtaining quotes from other manufacturers. After extensive research, it was clear that Wavestore still stood out from the crowd in terms of offering a cost-effective and robust video recording and management system, and it obviously also made sense to continue to use a system which our operators were very comfortable working with.”

It was a simple matter for Wavestore to provide a new high capacity server, pre-loaded with the latest version of the Wavestore VMS. With the ability to connect up to 192 cameras, it is able to meet PMS International’s immediate requirements, as well as provide the opportunity for even further expansion of the video surveillance system in the future.

Ultra-fast access enables operators to instantaneously display and search video data from any camera and from any previous time/date, regardless of the volume of the storage medium.

“The latest version of Wavestore’s VMS is very much more feature-rich and even more user-friendly,” said Pete Smith. “As a result, our security team will be able to respond quickly and effectively to any incident or emergency which may occur in the future.

As in the past, Wavestore’s pre and post-sales support has been excellent and the training provided for us on how to achieve maximum advantage from the new solution has been extremely beneficial.” 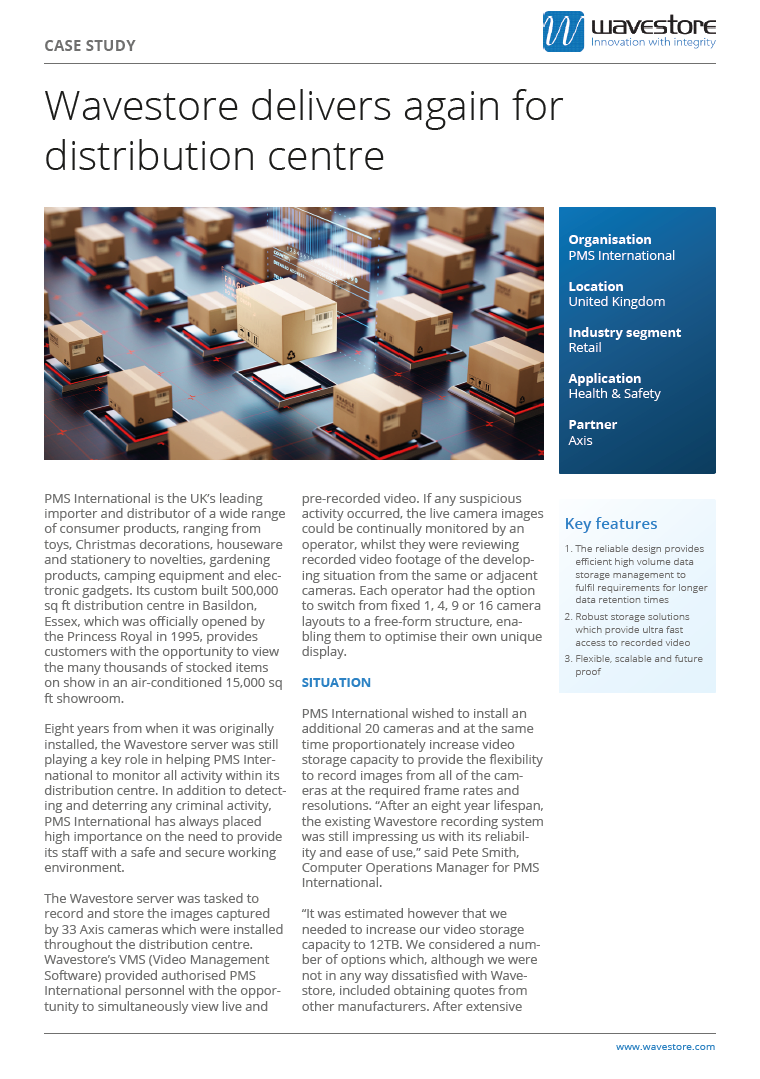