Wavestore’s ability to expand its digital video recording solutions in line with changing market requirements has been underscored by a European airport’s decision to further invest in an existing Wavestore recording system.

The airport is located approximately 48km from the centre of Milan. It sees approximately 19 million passengers pass through its terminals each year, whilst handling over 400,000 tons of cargo. As is the case with all international airports, security is of paramount importance and nothing is left to chance in its endeavours to protect passengers, staff and critical infrastructure from the threat of serious crime and terrorist activities.

With plans to increase the number of cameras monitoring terminal buildings, baggage movement areas, car parks, entrances and the airport perimeter boundaries from 640 to 800 cameras, the airport decided to review its digital video recording requirements.

In addition to ensuring that there was sufficient video storage capacity to record high-quality images from all of the cameras, there was also a desire to take advantage of the latest advances in software, such as video analytics, to provide security personnel with the best possible tools to combat the risk of potential terrorist activity.

All forty of the airport’s Wavestore recording servers have been upgraded to run the latest version of Wavestore video management software (VMS). This offers increased flexibility for individual operators in respect of how the combination of analogue and IP megapixel cameras are grouped and displayed, enabling workload management to be streamlined. The Wavestore technical team worked closely with the airport’s approved systems installers to design a solution which would be future proof by allowing for further expansion and result in the video surveillance system interacting with the airport’s other security systems so that operators in the airport security control room could observe live or recorded images relating to a specific alarm event.

Those authorised to access the system, such as the police, customs and passport control, have acknowledged that the ease of use and reliability of the recording system has dramatically improved. A spokesperson for the airport said: “We are delighted with the upgraded system. The decision to further invest in Wavestore was based on the existing system’s track record of being robust and reliable which is essential of course in an airport environment. Wavestore’s software has been able to exceed and not just meet our requirements and the open architecture of the system ensures new features can be added in the future. We are currently evaluating additional technology to be integrated with the Wavestore video management system (VMS).” 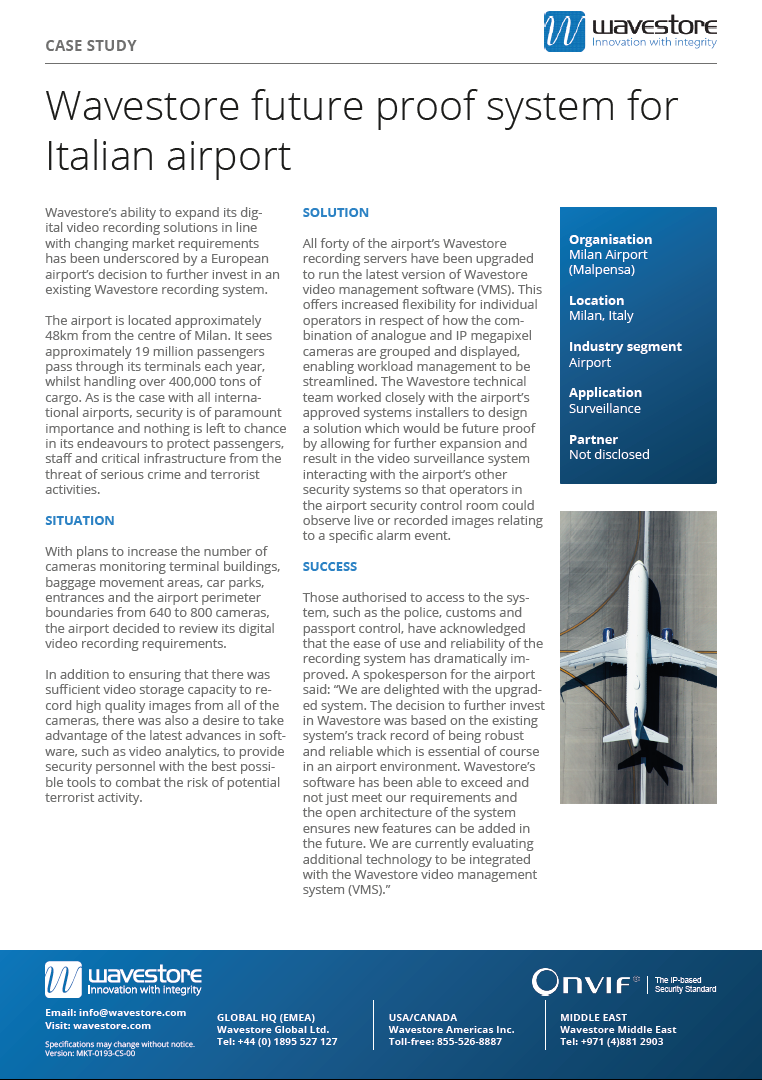