St. Dominic’s Sixth Form College in Harrow-on-the-Hill was founded in 1979. With over 800 students and 100 staff, St. Dominic’s is one of the UK’s top-performing sixth form colleges.

The College’s analogue cameras, which were installed in 2001, were connected to a digital recording system. Whilst everything worked, images quality when viewed live or replayed from storage, was no better than modest, and there were also significant issues with maintenance.

“The primary use was site security and the safety of our students,” said Information Services Manager, Michael McConigley. “The only internal areas covered were reception and the canteen.”

A new science building meant four additional exterior cameras were required. Three installation companies were invited to submit quotes for this work with the option of either analogue or IP technology left open. The tenders were evaluated for comparable costs, services and the ability to offer superior future-proof technology.

“The primary objective was to cover the building’s surroundings,” said Michael McConigley. “We choose ECL-IPS for two reasons. Firstly, we had an existing relationship with

“The project was completed over three phases, with ECL-IPS providing system design, installation, and training services. Phase one saw Mobotix M12 external day/night IP cameras installed during the winter of 2006/2007. During the following summer, ECL-IPS added four domed internal Mobotix D22 IP cameras inside a refurbished canteen with the digital images captured from these cameras stored on a new network-attached storage device.

“After the success of these two projects, we began to look at planning for the future,” said Michael McConigley. “We had 20 analogue cameras and we didn’t want to replace them all at once.”

Phase three, carried out in December 2007, involved ECL-IPS installing a 6 terabyte Wavestore Rock hybrid recorder which had the ability to take the feeds from 16 of the analogue cameras and all the new IP cameras.

“For the first time, one of the college’s senior managers was able to investigate an incident without involving me,” said Michael McConigley. “Navigation is super fast. I can now find a time and incident in a two week period within a minute.”

By using a hybrid storage and playback system, St. Dominic’s has also saved thousands of pounds by avoiding premature analogue camera replacement. “The confidence of senior management in our system is overwhelmingly positive,” said Michael McConigley. “We have future-proofed the system. We now have a scalable infrastructure and we have achieved this in less time and for less money than we envisaged was possible.” 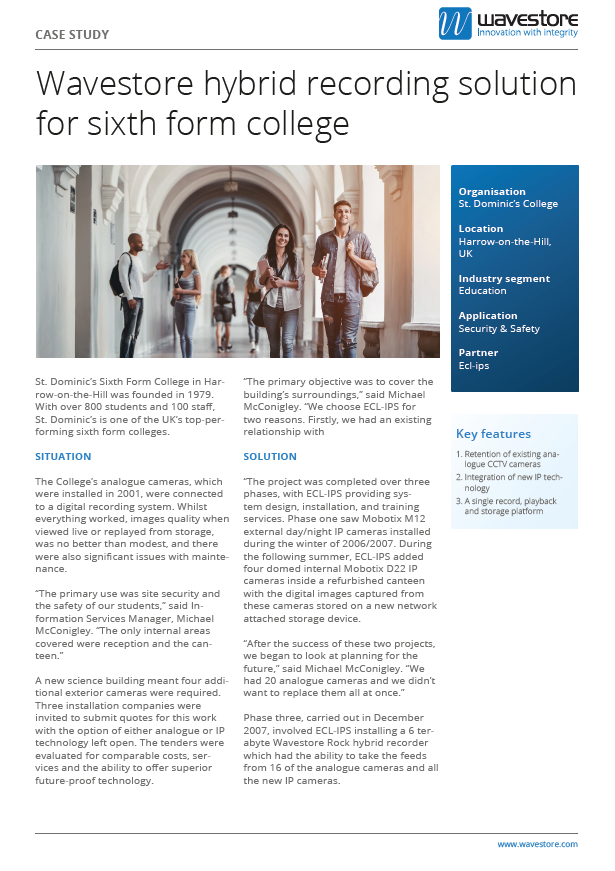