With persistent hooliganism and fighting becoming a serious problem at major football matches in Montevideo, Uruguay, the Football Association took the initiative to identify troublemakers and stop them from entering the stadium.

With Wavestore’s ability to seamlessly combine video recording and monitoring equipment, along with facial recognition and high-quality cameras, unruly individuals could be identified and action taken.

The chosen application had to be two-fold: firstly, to identify known individuals before entry, and secondly to use video data from any disruption during the match to apprehend, charge and add persons of interest to the database.

Police and stadium security personnel needed to monitor live recording and analyse current situations as they unfolded. Furthermore, facial recognition needed to be accurate in identifying troublemakers at the entrance gates so they can be refused entry.

The entire video data from every match would need to be transferred into a large data system maintained at the Ministry of Interior. This would then enable the police to retrospectively analyse key data and search for individual images over a period of years, ensuring data complies as evidence from any previous attendance.

The specification required a quantity of 20 fixed Megapixel IP cameras to monitor all areas of the stadium terraces. In addition, high quality PTZ cameras were to be deployed to enable the security personnel to view any region of interest and capture images at a high frame rate. IP cameras specifically to support facial recognition would be installed at all entrances to each stadium, and a quantity of mobile facial recognition and recording systems deployed to monitor the streams of fans as they approached the stadium along the footpaths.

A competition was held where the prospective bidders were allocated a specific time to set up their integrated solutions. They were asked to demonstrate their ability to detect and identify 40 individuals who had been entered into the database and were randomly integrated with an estimated 50,000 individuals approaching the stadium entrances to attend the match.

Having previously integrated, Wavestore and Herta collaborated on this project. The individuals, who variously wore hats, scarves, and dark glasses, were detected, and the events captured and highlighted within the video recording files.

When all the results of the competition were published it was confirmed that the Wavestore and Herta solution, proposed and installed by DDBA - a local company and key technical partner - had produced the best results by a considerable margin. The system was subsequently installed into the Centenario stadium and several matches played where known individuals were identified and refused entry. Thereafter similar systems were successfully installed in the Penarol and Nacional stadiums.

A data storage system was also installed into the ministry responsible to retain an archive of every match played at the three stadiums. When individuals were apprehended in future, the global archive would be checked to establish whether they had been involved in previous football match disturbances. 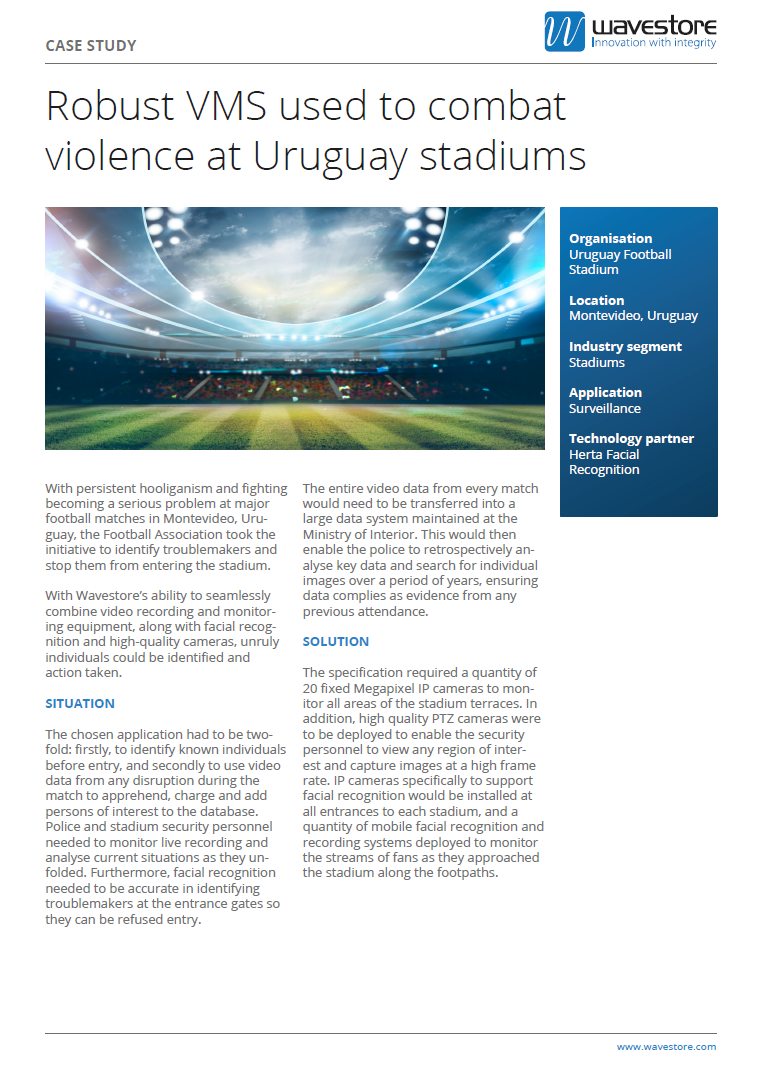