Situated in the town of Aberystwyth in West Wales, Penglais Secondary School, which was established in 1973, provides education to over 1,350 pupils aged between 11 – 19 years.

Like many schools in the UK, Penglais Secondary School relies on its CCTV system as a valuable tool to help enforce its zero-tolerance policy on bullying and any form of criminal activity, such as vandalism and theft.

Unfortunately, the school’s CCTV system which was installed some years ago had become technologically outdated. The 16 existing analogue cameras were still working satisfactorily but did not fully cover all areas of the site and the recording system was inadequate for the school’s requirements.

“There were a number of entrances and exits as well as part of the school’s perimeter which were not covered by the existing cameras,” said Len Vaughan, Penglais’ Network Manager. “We decided, therefore, to look at how best to expand the system, whilst at the same time, upgrade the method of recording.”

“For such a sophisticated hybrid surveillance system, it was a relatively straightforward installation.”

Fortunately, help was at hand in the form of a ‘Schools Target Hardening Grant’ from the Welsh Assembly, which allowed the management of Penglais School to invest in the very latest IP network-based video surveillance technology.

Len set about researching the best option for the job in hand and drew up a ‘wish list’ which included a requirement to network the existing analogue cameras with 12 new IP network cameras and for authorised staff to be able to view images from any of the cameras from anywhere on the network.

The upgraded system also had to be future-proof to allow further additional cameras to be added in the future as and when the school’s requirements changed. Most importantly, Len wanted to be able to record the highest possible quality images, i.e. full D1 resolution at 25 frames per second, from some of the cameras.

After evaluating a number of options, Len recommended to the school’s management that they should invest in a Wavestore Granite digital video recording solution.

The Granite is Wavestore’s top of the range ‘hybrid’ recorder, which utilises an ultra-reliable Linux based open software platform and is able to simultaneously record images from a combination of up to 64 analogue and IP network cameras.

The Wavestore software offers an extremely fast search facility to allow users to be able to quickly review recorded images of any incident.

“For such a sophisticated hybrid system, it was a relatively straightforward installation,” said Len. “The Granite has enabled us to continue to obtain value from the existing analogue cameras, whilst investing in the latest technology in the form of the IP network cameras. Overall, we are very pleased with the solution. Being able to install it ourselves saved quite a lot of money, but most importantly, we now have a system that covers all areas of our site.” 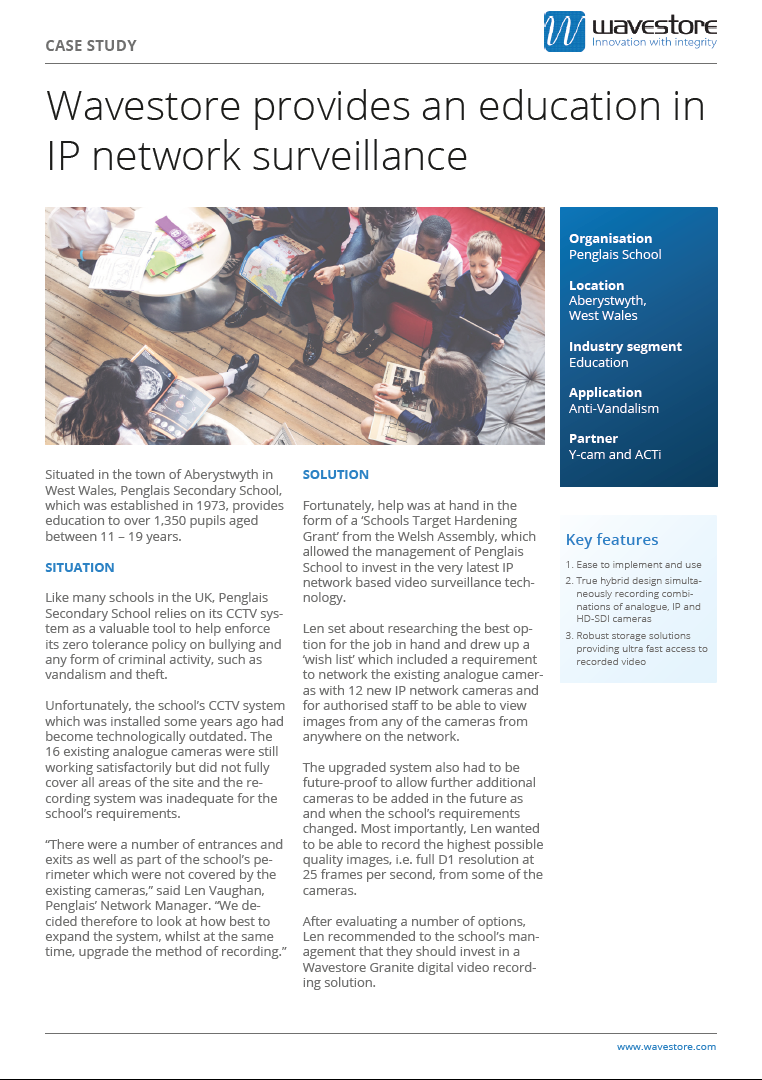