Wavestore has played a key role in a project intended to secure a network of Data Centres in Nigeria. In support of systems integrator Active Intelligence and our technology partners, AMG Systems and ISM, Wavestore has provided best practice advice as well as guidance on determining video storage requirements for the project. The government project will initially be rolled out in capital city Abuja, followed by Lagos and Minna.

Commenting on the deployment of PanoCam360 cameras and the utilisation of Wavestore’s expertise, Gary Munroe of Active Intelligence said: “The analytics offered by the PanoCam360 is perfect in meeting the requirements for the Payment Card Industry (PCI) Standards issued May 2013, as mandated by Visa and MasterCard, which are the standards against which the installation will be measured. In all aspects, the PanoCam360 surpasses the requirements as set by Visa and MasterCard and the support offered by AMG has, in every respect, been second to none! AMG brought Wavestore to the table to provide best practice advice and guidance when determining storage and has facilitated the building of a partnership between ISM and the other two entities for mutual benefit."

"At every stage, the AMG team took the time to understand the changing demands of the project and responded effectively and professionally. It is for these reasons that AMG remains the partner of 1st Choice for Active Intelligence. The PanoCam360 was chosen in part because of the flexibility demonstrated by AMG in meeting our requirements and their willingness to understand the constraints under which we were working. Just as important was the PanoCam360 itself, which can be monitored and controlled simultaneously by several viewers and proved very easy to install and configure. A single PanoCam360 can replace several traditional cameras and it provides the ability for several users to simultaneously view and control the product. This meant that we could not only reduce the total number of cameras but also reduced the installation time greatly.”

Faz Colbhie, Business Development Manager Africa at AMG Group, says, “We are delighted that Active Intelligence has chosen AMG’s PanoCam360 for this nationwide project of unquestionably vital importance in a developing country in dire need of enhanced critical infrastructure. Our collaboration with Active Intelligence for this particular project in Nigeria also demonstrates the strength of our global reputation for designing and integrating complex security systems renowned for their high level of innovation and efficiency.” 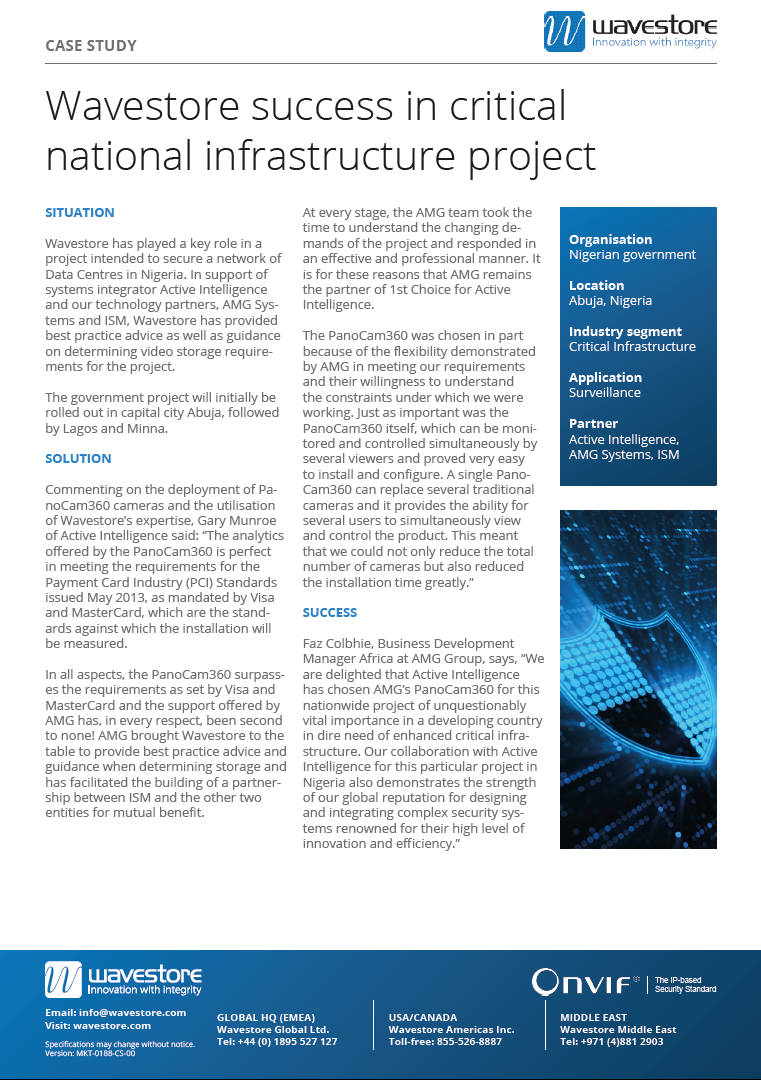