A hybrid digital recording system solution from Wavestore, which is at the heart of the Royal Borough of Kingston-upon-Thames’ recently upgraded and expanded surveillance system, is providing control room operators with the ability to view live or recorded images from industry-standard analogue cameras, alongside images from the latest generation of Full HD cameras.

The project was designed by Atkins, one of the World’s leading engineering consultancies and was installed by Videcom Security, a specialist installer of Town and City Centre CCTV systems. The first phase saw the installation of 128 analogue cameras to allow comprehensive remote monitoring of the town centre. Seven Sanyo Full HD network cameras and an additional eight analogue cameras were added shortly afterwards to especially cover the Guildhall complex.

“We recognised early on that the success of this project was dependant on choosing a recording solution which was operator friendly and was expandable as and when the client’s requirements changed,” said Martin Taylor, Digital Systems Manager for Waltham Cross based Videcom Security.

“We evaluated digital recording systems from a number of well-known manufacturers but the final decision took a number of factors into consideration including the operators’ assessment of all three systems which were shortlisted.”

“With minimal training, our operators very quickly became confident in their ability to get the best out of a system.”

The conclusion after two weeks of exacting tests was that the Wavestore hybrid digital recording solution, working in conjunction with Meyertech’s Fusion II software, was the easiest to operate in terms of camera control, image display and transfer of evidence to a CD or DVD.

“From a technical standpoint, we were happy that the Wavestore system was preferred by the operators. It utilises a Linux based operating platform which we know to be robust and is flexible in terms of adding on redundant hardware and RAID storage,” added Martin Taylor.

The Wavestore hybrid digital recording solution, which utilises a range of compression technologies, can support any combination of analogue and IP cameras, allowing operators via a simple listing, to view live or recorded images from any camera or group of cameras.

Commenting on the success of the project, Martin Lazell, the Royal Borough of Kingston-upon-Thames’ CCTV Control Room Manager said: “We were impressed with how Videcom Security and the Wavestore technical support team worked together to deliver a system which we are very pleased with.

With minimal training, our operators very quickly became confident in their ability to get the best out of a system. We also value the fact that we will be able to add new generation IP cameras as and when we need them, whilst continuing to benefit from our investment in analogue technology.”

Martin has always welcomed security professionals to visit his award-winning control room, which is good news for Wavestore as a recent visitor was so impressed with what he saw, that he subsequently placed an order for a 90 camera system for a project in South Wales. 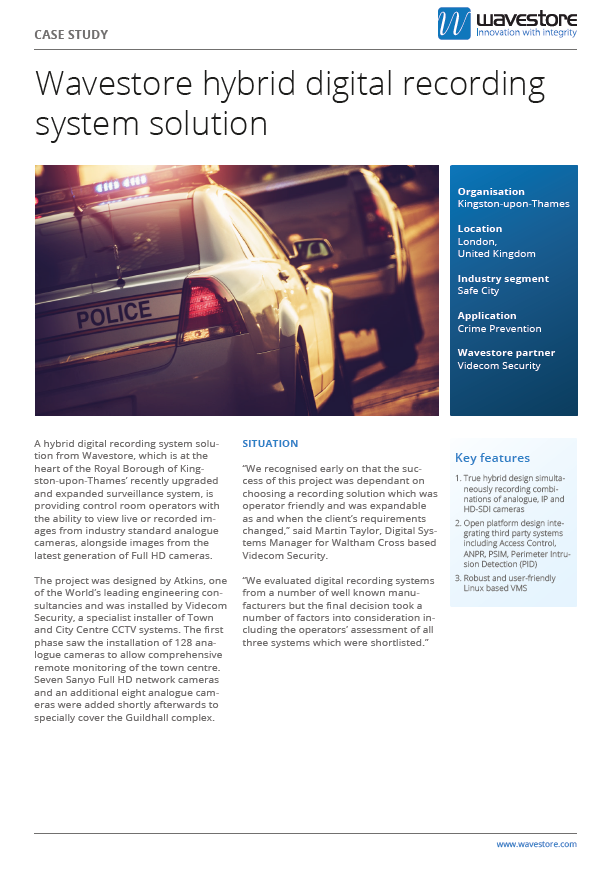