Wavestore was awarded the contract to upgrade and expand the digital recording system at IBM Bromont’s manufacturing facility in Quebec, Canada.

Bromont is IBM’s largest microchip assembly facility in the world in which it has invested more than $1.3 billion. The expansion of the digital recording system reflects the need to extend surveillance of the site to include the new MiQro Innovation Collaborative Centre (C2MI).

C2MI, which IBM Bromont established in partnership with Université de Sherbrooke and Teledyne DALSA Semiconductor, is an international centre of excellence for electronic assembly research and where industrial R&D is conducted on the packaging of microsystems and electronic microchips. The investment in building and research equipment was supported by grants from Industry Canada and by Quebec’s Ministère du Développement économique, de l’Innovation et de l’Exportation.

Wavestore manufactured IBM Bromont’s original digital recording system which was chosen because of its ability to provide a server group solution where all the cameras appear as if in a single-point-of-access network. Wavestore was also able to provide an interface to the site’s access control system, as well as integrate with software that could give command and control of video, access control, intercom, and intrusion devices from a single console.

“We are naturally delighted that IBM Bromont entrusted us with providing a sophisticated but easy to use IP network-based recording system which will record and store images from both IBM’s existing facility and its new campus.” said Chris Williams, Director of Wavestore. “It involved adding a number of servers and was designed to take advantage of the very latest advances in IP network-based recording technology.”

The project, which was completed in June 2011, saw Wavestore’s expanded and upgraded digital recording solution working in conjunction with CNL Integrated Situation Management software to allow operators to view live or recorded images from a large number of Pelcoan analogue cameras, but inherent in the design of the system is the ability to support high definition megapixel cameras if and when required. “The reliability and robustness of our existing digital recording system have made the decision to continue to work with Wavestore extremely easy,” said John Leduc, Security Manager for IBM Bromont Security. “We are confident that Wavestore, working in cooperation with CNL will provide us with a recording solution which meets our expectations.” 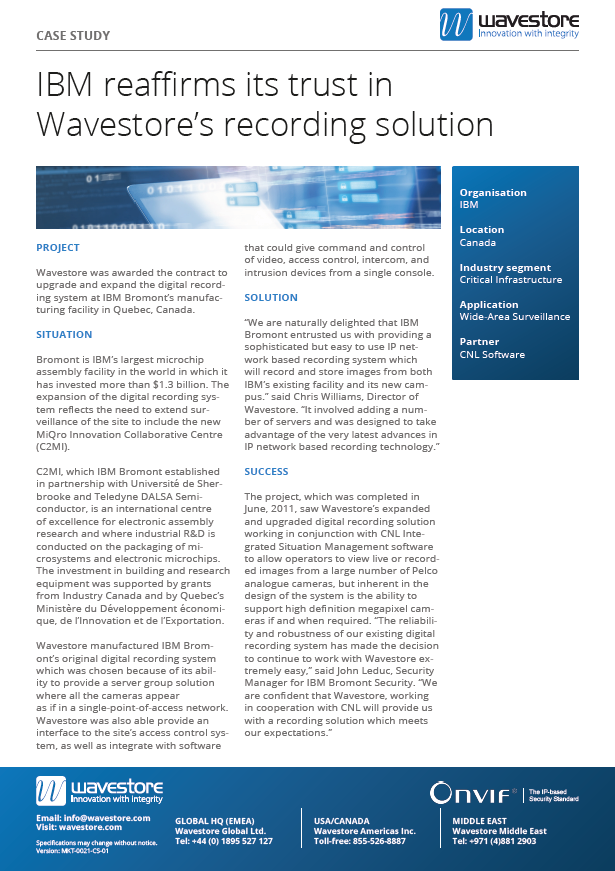