Maintaining a good record at Citypoint with Wavestore

One of only seven office towers in the City of London, the iconic Citypoint building, which was originally built for British Petroleum (now BP) in 1967, comprises 65,642m² offices spread over 34 floors, with basement parking and shops, restaurants and a fitness centre at ground floor level.

A recent upgrade of the CCTV system at one of the City of London’s landmark buildings, Citypoint, provides an excellent example of why it is so important to have a scheduled maintenance programme for a CCTV system.

When CB Richard Ellis was appointed to manage the building by the US-based owners, it was discovered that the existing CCTV system had not been properly maintained for some time. “We very quickly established that there wasn’t a plan in place to ensure that the 150 cameras were checked on a regular basis to ensure that that they were working satisfactorily,” said Lee Murray, Building Manager for the Management Services division of CB Richard Ellis. “Our audit confirmed that very few of the cameras were operating properly, although in most cases the camera lens just needed cleaning or refocusing.”

Even more bad news was discovered when Lee and his colleagues took a look at the building’s video recording system. Apart from the fact that anything which had been recorded was in the main unusable from an evidence point of view because of the poor quality images captured by the cameras, the recording system also did not have sufficient capacity to simultaneously record images from all of the cameras at the same time. “The recording system from Wavestore clearly had the potential to do everything we needed it to do, but like the cameras, it had not been properly maintained or upgraded to reflect the number of cameras which had been installed in and around Citypoint,” said Lee.

“In a tough economic climate it may be that some companies will be reluctant to enter into a service agreement for their CCTV systems. The poor condition that the system at Citypoint was in before CB Richard Ellis’ involvement however, underscores the need for CCTV systems to be regularly audited and maintained.”

NCB Richard Ellis commissioned Global Fire and Security Systems Ltd to carry out a complete overhaul of the CCTV system. “It was, in fact, a relatively simple process to improve the CCTV system so that it was fit for purpose,” said Steve Shillingford, Northern Operations Manager. “Simultaneously to testing and servicing each of the 150 cameras, we worked closely with Wavestore to ensure that its recording system was upgraded to have adequate capacity for the number of cameras and that the very latest version of the Wavestore software was installed.”

The functionality of the upgraded Wavestore recording system also enabled CB Richard Ellis to build a standby ‘Crisis Management’ room where the CCTV system could be monitored and controlled should the building’s main control room become inoperative for any reason.

“The recording system from Wavestore clearly had the potential to do everything we needed it to do.”

As a result of Global Fire and Security Systems and Wavestore’s efforts, Lee Murray feels that Citypoint now has a CCTV system which his security colleagues can use to identify any suspicious activity, initiate an appropriate response and record high-quality video of the evidence for a post-incident investigation. “We have been fortunate that there have not been any major incidents but we are of course always aware of the need to ensure the safety and security of everyone who works at City Point,” said Lee.

Although, fortunately, no major emergencies have occurred, in recent months there have been several instances where the CCTV system has done its job. In the first instance, a video was provided to the police which led to the successful prosecution of a drunk who had caused considerable damage to the Citypoint fire doors, and in the second instance, the claim of a person who was threatening to sue because they had tripped up whilst in our basement car park was disproved as a result of the recorded high-quality images.

CB Richard Ellis takes great pride in the processes in place to ensure health & safety compliance at Citypoint and it was therefore extremely valuable to be able to use the CCTV recording of the supposed incident to disprove the claim and avoid the need to pay compensation. 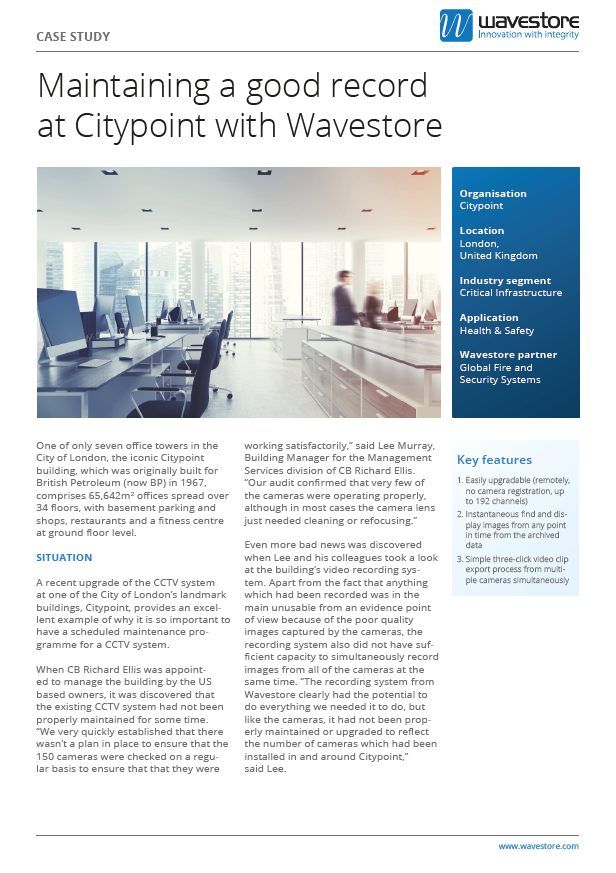