The Royal Portbury and Avonmouth Docks occupy approximately 2,500 acres just off the M5. The docks are owned by the Bristol Port Company which has invested over £450 million since 1991 to create a modern, thriving business offering a full range of shipping, distribution and logistics services. It is Britain’s most centrally located deep seaport and is recognised as the most economical port distribution location in the UK, providing access to a population of 45 million people within a 300km radius.

The Bristol Port Company needed a reliable video recording and management system that could meet its demanding specifications. A large number of doors and gates located throughout the docks needed to interact with a CCTV system so that security personnel could monitor the movement of people and vehicles in and out of the docks and retrieve if necessary, video evidence of any suspicious activity.

The Wavestore recorders at the Royal Portbury and Avonmouth Docks are set up as a server group which enables the police and other authorised personnel to instantly view any of a large number of cameras, whether they are triggered by an alarm, motion detection or as part of the general security monitoring regime.

The management of the cameras is achieved by using a large pictorial layout of the port, with camera positions shown. A simple mouse click brings a camera’s images into view, whilst users are able to control PTZ cameras via a joystick connected to their PCs. When researching which video management and recording management solution to invest in, the Bristol Port Company found that Wavestore was the only software which was capable of achieving this task.

The Wavestore system has performed extremely well at this very large site which, although subject to various environmental challenges, has to maintain a high level of security 24/7.

The Linux operating system has been in operation for several years and has consistently demonstrated its power and reliability. Linux is intrinsically safe from viral attack and does not need anti-virus and firewalls, as do most other recording systems.

The Bristol Port Company has the option to consider adding high definition megapixel cameras. Wavestore’s VMS (video management software) makes this an easy upgrade to achieve. Both Wavestore’s hardware and software is fully forward and backwards compatible and so obsolescence is not a problem that could concern the port. 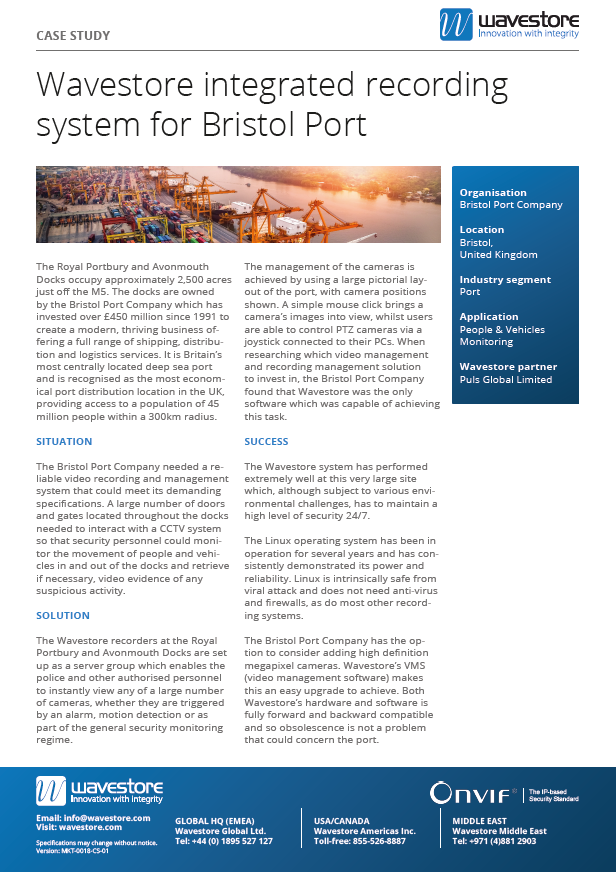