The Docklands Light Railway (DLR), which was opened in 1987, is an automated light metro system which serves the redeveloped Docklands area of London. In its fiscal year 2013, the DLR carried 101.5 million passengers and was able to do so with minimal staffing on trains.

The Dockland Light Railway (DLR) required images captured by six cameras in each carriage to be recorded and stored for a minimum of ten days. In addition there was a requirement to retain a video buffer of images recorded in real-time of any activity relating to passenger generated alarms or other incidents which may need investigating.

A custom video compression card was produced to meet the 150 pictures per second video specification which could operate in the rugged environment. Wavestore’s recording software was modified to support all the features required and to be able to interface to the rugged PC104+ motherboard.

The unit permits recorded data to be retrieved onto a laptop PC via an encrypted local wireless LAN within the train. The software incorporates features to ensure compliance with the Data Protection Act CCTV Code of Practice (COP) e.g. the ability to obscure the faces of persons not involved in an incident. The encryption technology provides a highly secure and advanced authentication system and guarantees against image tampering. Police and courts are therefore able to authenticate any video that has been retained for evidence purposes.

A wireless network conveys CCTV images from trains to the Control Centre using a 2.4GHz radio Communications system. Wavestore’s EVI (Extended Video Interface) is used to provide “maps” of the rail network and the trains and enables the operators to have interactive access to view in real-time, any camera in operation.

The system has been introduced onto all of the cars on the DLR network and has enabled security staff to apprehend individuals through the ability to review the video associated with specific allegations and events. 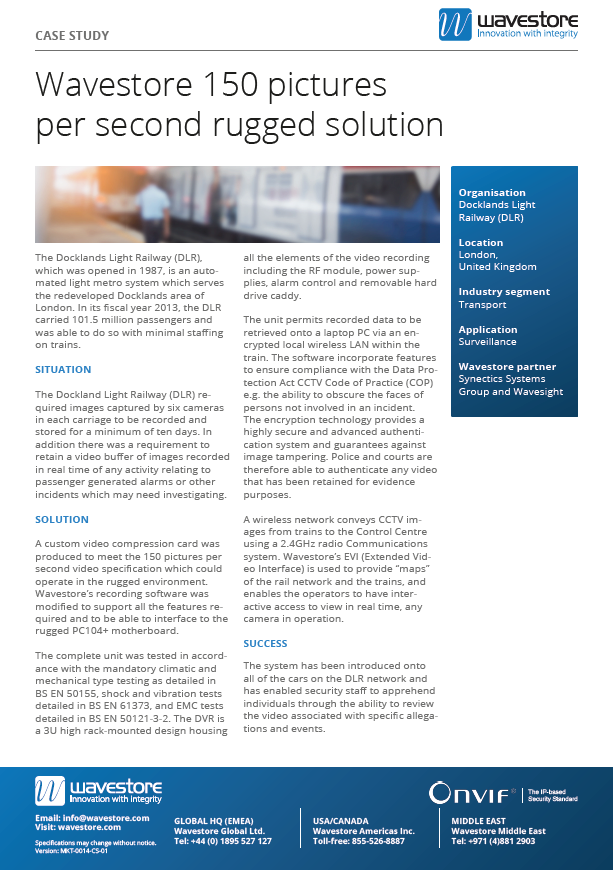